Kaine over the past four days have finished tracking the majority of guitars and bass for their new album Reforge the Steel, as well as completed further work on the drum edits for the album. The tracking again took place at Redwall Studios in Bury, Greater Manchester.

The team at Pointy halo Productions, Carl Brewer producing once again from Crisis of Faith with Sheldon Jolly also assisting with much of the tracking including writing contributions to the new songs for what should hopefully be the biggest and best sounding Kaine record yet. 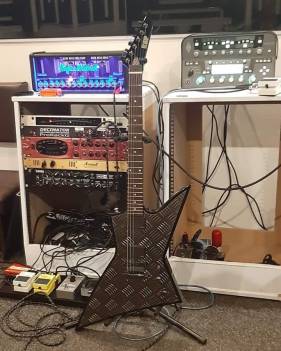 The album is the recording debut with the band for Liam Etheridge, Toby Woods and Isaac Healy who have all worked with extreme professionalism throughout the process so far having only been the bands line-up since May of 2018. It’s also the first album that all three band members have recorded.