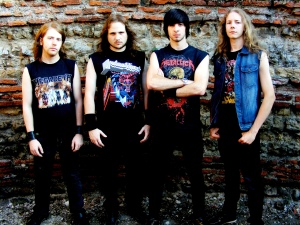 The mastering of the new album is now complete and the artwork is off with Cram Duplication ahead of the release for finalisation. The mastering phase was completed by Z-Plane, which was recommended by the albums producer Akis K.

There is no official release date to be announced as of yet but there will be further information coming as soon as possible. The band is pleased with the outcome of the mixes and masters and looks forward to being able to finally release the album later this year.

Producer Akis K of Angry Bee Studios in London said: “Producing the new Kaine album was a great experience. Kaine write and play music that comes from within, without compromising and trying to conform to trends. Every single note and word in their songs is there for a good reason and the result is an album I am truly proud of.”

Rage Sadler added: “We worked extremely hard on this album starting with coming up with the material and the extensive rehearsals that followed during a time we were constantly on the road. To finally record it at the rate we did was exceptional, the whole thing was done in less than a week. Akis pushed us along the way and managed to get a great sound overall for the record and one that stands up alongside other releases of this day. We will hopefully be working with Akis again on future releases.”