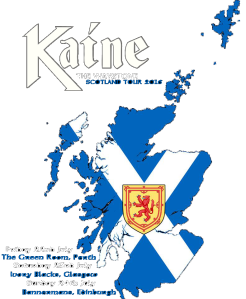 New Wave of British Heavy Metal revivalists Kaine have announced their first standalone tour as a band as they head to Scotland in July 2016.

The band, who did not do any supporting tours in 2015, have decided to make their first attempt at touring alone with three headline dates. The first date will be at the Green Room in Perth on July 22nd, then the Ivory Blacks in Glasgow on the 23rd and finally the band returns to Bannermans in Edinburgh on the 24th.  The tour will be self-financed by the band and a special one off tour shirt will be made to help fund the trip.

Rage Sadler said: “As we weren’t able to do any supporting tours in 2015 we have decided to make our own steps to touring alone with a three date tour in Scotland next year. This is of course a risk as we will be funding the entire tour ourselves including promotion but we felt at this stage this would be a natural step for us as a band. Scotland has one of the best underground Rock and Metal scenes, so it was our natural first choice when it came to doing our first standalone headline tour.”

The band will be supported by Disaster Area and Storm of Embers in Glasgow and Damaj plus Nest of Vipers in Edinburgh. This tour will be Kaine’s fourth trip to Scotland having played there three times in 2014 supporting Monument and American Metal legends Mordred on their tours and performed at Wildfire Festival in 2015.