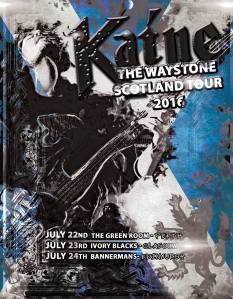 Kaine’s tour of Scotland begins this Friday as they play The Green Room in Perth. This is the first headline tour undertaken by the band and entirely self promoted and financed. They will be playing different sets on each night made up of songs from Falling Through Freedom, The Waystone and their soon to be recorded third album.

Vauxhall will be supporting the tour by providing the band with an Vauxhall L2H1 Doublecab as part of an endorsement deal. You can follow Kaine on the road using the ‪#‎vivaroontour‬ hashtag.

The tour takes place at the following dates/venues. Pricing will vary between venues but all tickets will be available on the door from 7pm.

Made to order merchandise can be bought from Dizzyjam or ordered at the gigs.