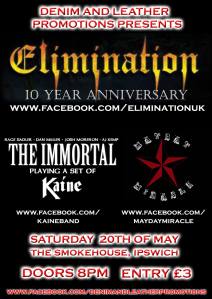 Kaine founders Rage Sadler, Dan Mailer and Josh Moreton will finally reunite for a one off show at The Smokehouse in Ipswich on May 20th 2017. They will play a set of material drawn from the recently re released Falling Through Freedom and The Waystone albums.

The opportunity for the reunion arose from The Elimination 10 year show which Kaine were asked to play as support, however Kaine couldn’t do the show. Dan Mailer and Josh Moreton were already playing as part of the Elimination line-up, so it offered a perfect opportunity to the three original members to reunite for a set for the special show. It will be the first time the founder members will have played together officially since 2012.

The three members recently joined each other on stage for a rendition of Iron Lady alongside the current Kaine line-up at Asylum on February 28th.

Joining the founding members will be AJ Kemp, who is currently playing in Dismanibus alongside Josh Moreton, on lead guitar. The band will be billed as “The Immortal”. The show is just £3 and doors are at 8pm. You can find more information here.