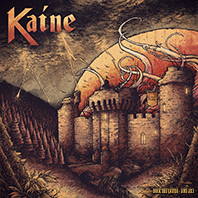 Kaine’s 2013 live album Rock The Castle has also sold out as of last night. The live album was released following Chris MacKinnon joining the band and featured tracks off of the bands first E.P. and debut album.

It was recorded at St. Anne’s Castle, then England’s oldest surviving Inn. The Inn itself dates back to 1171 and a witch allegedly once occupied the building, who was executed and then buried under the village green. A witch’s stone was then placed on the grave to stop her from terrorising the village which still exists on the grounds of the old Inn. The building is mentioned in the 1086 Domesday Book, and served ale to pilgrims travelling to Thomas Becket’s tomb in 12th Century Canterbury. In the cellars there are remains of tunnels, which reputedly link the inn with the nearby Leez Priory, and Great Leigh’s church.

Rock The Castle was the name of James Balcombe’s (Osmium Guillotine, The Tickturds, Aaliyah Wood, Myopic Empire and even once with Kaine live) regular rock nights at the venue, and the name of the album is taken from those very nights. After the venue changed ownership the music nights stopped at the venue, which became a restaurant, and the name subsequently changed to The Castle.

Another run of Rock The Castle CD’s will not be made.